The Gouldian Finch (Erythrura gouldiae) is one of the Top End's most colourful birds.  Over the last 100 years Gouldian finch numbers have collapsed exponentially from hundreds of thousands to an estimated 2,500.  The species' decline is attributed to a number of factors, predominantly inappropriate European fire regimes which can destroy their grass seed food stocks and tree hollow nesting sites, but also grazing from introduced herbivores, trapping for the cage bird market, and susceptibility to a lung parasite.  Since the 1980s when trapping finches for the cage bird market was banned, finch numbers have continued to decline.  Evidence also suggests that although the species appears susceptible to the parasitic air mite (Sternastoma tracheacolum) this susceptibility is not inherent, but rather a consequence of the environmental stress the finches were already under.  Though it is reasonable to assume poaching of wild birds does still occur, evidence certainly suggests that inappropriate fire and habitat destruction are the biggest threats facing the Gouldian Finch.

Gouldians and the plant species they rely on have evolved to depend on patchwork mosaic burning, as developed by Indigenous Australians over tens-of-thousands of years, for their survival.  This burning technique creates the necessary stages of growth for the variety of grasses Gouldians need throughout the year. It also ensures overall protection of these grasses and the Gouldians nest tree, which in this part of the Northern Territory is Eucalyptus tintinans, from out of control late Dry Season fires.  Eucalyptus tintinans grows on the rocky hills throughout the Station hills, and where these stands are within four kilometres of permanent water Gouldians utilise them.

In recent years finch numbers across Australia appear to have stabilised, and certainly on the Station the birds have maintained good numbers.  Good pastoral management and an appropriate fire regime, coupled with appropriate stock densities mean the birds appear to be thriving on the Station.  Large numbers of juveniles in the flocks also indicate they are breeding in the area.

Approximately seventy five percent of Gouldian finches have black faces, while around twenty five percent have red faces. Less than one percent - one in three thousand according to the Australian Wildlife Conservancy - have yellow or golden faces. A yellow-faced Gouldian has been spotted at the Gouldian Hole on two occasions in 2018, photographs of which can be seen in the slideshow below.

Our Gouldian site is one of just a handful across the north of Australia where mobs of over 150 birds are seen. 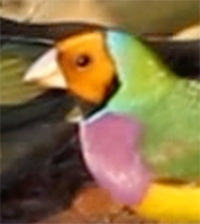 The slide show below shows some of the images taken at the site in 2016, 2017 & 2018, which you will likely be able to replicate yourself on our tour.